Lost your password? Please enter your email address. You will receive a link and will create a new password via email.

Sorry, you do not have a permission to ask a question, You must login to ask question.

Welcome to CosmoLaunch - A Diary of the Universe

CosmoLaunch welcomes every Cosmonite to share invaluable knowledge about the mysteries of space. This platform is a launchpad to the depth of Cosmos.

Join us as we unfold the complexity of the Universe, from the genesis to the end.

The prospect of having cosmic counterparts has intrigued Humanity for centuries. Moreover, the recent buzz about Area 51, the everlasting speculation about the Bermuda Triangle, and many other allegations have led to a million-dollar question – Does or did extraterrestrial life exist? To answer this question, scientists are trying to utilize Mars exploration rovers to uncover the history of planet Mars.

The golden rule while searching for life is to follow the trail of water. The chance of finding microorganisms becomes manifold when water is present.

One can attribute the recent interest on Mars to the above reason. Also, the red planet has one of the most adjustable environments after Earth. With the Curiosity rover uncovering water in Martian soil, the quest has only begun.

The Mars 2020 mission is the result of the above idea. NASA successfully launched the Perseverance rover, the latest of Humanity’s Mars exploration rovers, via the Atlas V 541 rocket on July 30th, 2020, from the Cape Canaveral Air Force Station in Florida. The estimated landing on the Martian surface is in February 2021. 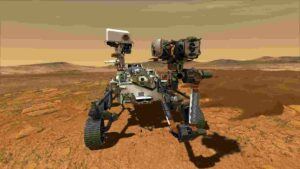 NASA’s impression of the Perseverance rover in Mars

Isn’t it absurd to send many rovers to examine the same Martian soil fundamentally? Isn’t it a waste of resources?

No, because scientists innovate in every step. The missions Spirit and Opportunity mostly concentrated on Mars’ past habitability. But Perseverance will also investigate the requirements for future human expeditions to Mars. 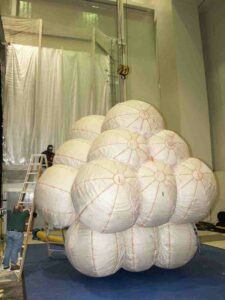 Sojourner, Opportunity, and Spirit rovers employed the airbag mechanism to land safely. According to the method, a parachute would slow the rover down, and the airbags surrounding it would inflate, forming a cocoon, while falling towards the surface. Then it would continuously bounce until it comes to rest. Then the airbags would deflate, and the rover would emerge.

Airbag method has some drawbacks:

Curiosity had a lot of challenges. It weighed about a ton, so the airbag mechanism was out of option. Scientists had to come up with a unique technique – the Skycrane maneuver. The case is the same for Perseverance. 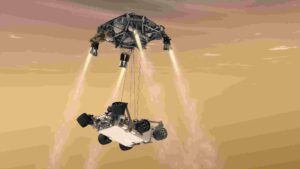 The Skycrane maneuver is where a descent stage containing the rover would detach from the parachute. Then, this vehicle would use rocket boosters to reduce its downward acceleration. After reaching a few meters above the Martian surface, the stage would hover, and the rover would lower itself slowly, backed by a tether attached to it. On touchdown, the rope would cut off.

There are some notable restrictions here:

Some people may ask why the ropes are necessary. Can’t the descent stage reach the surface slowly along with the rover?

Over the years, scientists have learned many lessons. For instance, the Opportunity rover lost contact after a severe dust storm deposited enough dust on its solar panels to deplete solar power. Opportunity’s famous last message is still nostalgic.

My battery is low, and it’s getting dark.

If the descent stage with its boosters reaches close to the ground, it can quickly spur a dust cloud and render the solar panels useless, hence bestowing the same fate as the Opportunity rover. So, a considerably long tether is necessary.

It took nearly seven minutes for Curiosity to traverse the distance between the Martian atmosphere and its surface. The scientists named it the “seven minutes of terror,” because the Skycrane arrangement was a gamble to some extent, and one can never know.

Any signal from Mars takes 14 minutes to reach Earth. Imagine that a mission craft transmits a message on entering the atmosphere. By the time scientists receive the signal, the Mars Exploration rover would have landed and spent seven minutes on Mars, either dead or alive, thereby becoming a part of Martian history.

Perseverance will adopt the Skycrane maneuver as well. But it has some additional features.

Previously, luck was a primary factor in ensuring an uneventful landing. Such incredible innovations have reinforced our control over the landing process.

Why are craters chosen as landing spots?

Massive asteroid collisions left Mars with significant craters. When an asteroid strikes, it can excavate deep-seated minerals onto the surface and trigger hot springs. Over time, life can exist in these regions. 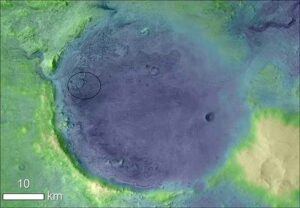 Curiosity landed in the Gale crater, and Perseverance will land on Jezero crater. Scientists believe that these places once held water. Years of observation have uncovered dry hexagonal cracks on the surface, which can testify the presence of clay.

Perseverance can even collect Martian rock samples and store them in 20 small tubes. It is something that no other rover did before. This process is Sample Caching.

NASA aims to collect these samples because scientists believe that subsequent missions can retrieve them back to Earth. NASA deserves appreciation for taking these measures with a long term plan.

The Perseverance rover won’t go alone to Mars. Ingenuity rotorcraft will be its companion. For the first time in history, humans will witness a powered flight on a planet other than Earth. The rotorcraft weighs only about four pounds, but its counter-rotating blades can attain 2300 – 3000 rpm. One can think that Mars has only 38% of the Earth’s gravity. But the lighter Martian atmospheric pressure demands a significant power usage to lift the rotorcraft even a little. 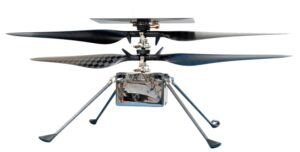 The Ingenuity rotorcraft is a technological demonstration that can revolutionize the mode of space exploration if it succeeds. It is because the area of observation on a planet will become manifold. Rotorcrafts, if done right, can cross steep hills, which is something Mars exploration rovers can’t do. With too much information regarding the mechanism and testing, Ingenuity craft deserves a separate article. 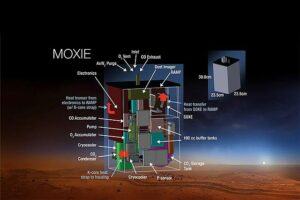 The Mars Oxygen In-situ Resource Utilization Experiment (MOXIE) is the real deal in this mission. This instrument works like a tree to convert the carbon dioxide in the Martian atmosphere to oxygen. Such an experiment, done on a large scale, can provide sufficient oxygen for breathing and propulsion. Moreover, the ultimate dream of setting up Mars bases will become a reality.

If humans indeed explore Mars and want to return home with their equipment, they will need tons of fuel whose availability from Earth is impossible. That is why an innovation like MOXIE is necessary. It will go down as one of the most exceptional and innovative trials in space exploration history.

The Mars Environmental Dynamics Analyzer (MEDA) analyses the wind speed and direction, temperature, dust particles, and humidity of the Martian environment. It predicts the weather and how it affects the Perseverance rover while observing the solar radiation effect on the surface rocks. This information can lead to potential settlements on Mars.

Mastcam-Z represents the two cameras on the rover’s mast with zooming ability. They serve as the Perseverance mission’s eyes that can look for valuable rocks and signs of water.

Radar Imaging for Mars’ subsurface Experiment (RIMFAX) can give a centimetre-scale resolution of the Martian subsurface. Also, it will be the first radar instrument to observe the underground of Mars and detect salt, ice water, etc. from the surface. Till now, only the orbiters carried the radar observation instruments. This innovation can lead to archaeological discoveries and uncover ancient life mysteries. 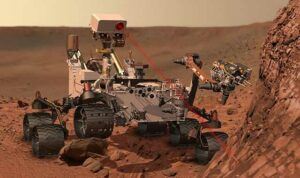 Like Curiosity’s ChemCam, Perseverance’s SuperCam shoots laser towards a rock twenty feet away to vaporize a part of it. SuperCam’s microphone makes a variety of pops depending on the material properties of the vapor. Consequently, the scientists note down the chemical composition.

There are microphones in the landing system that can detect the sounds during entry, descent, and landing. Additionally, they can note down the sounds of different instruments at work in the Perseverance rover.

Planetary Instrument for X-ray Lithochemistry (PIXL) can observe the rocks to the precision of a grain of salt. This mechanism is necessary to locate any signs of microbial life. It also takes close up pictures/clips of its observations.

The name SHERLOC tends to ring a bell. Akin to the famous Sherlock Holmes, The Scanning Habitable Environments with Raman & Luminescence for Organics & Chemicals (SHERLOC) is a detective. It has a magnifying glass, and it investigates the target at a safe distance to prevent contamination of clues. To identify some chemicals, it uses UV lasers.

Imagine that Mars exploration rovers travel to the red planet only to collect meteorite samples entirely different from Martian composition. It would be one of the silliest mistakes of humankind. Here, SHERLOC comes to the rescue since it can differentiate between Martian and alien samples.

SHERLOC will also carry types of space suit fabric and helmet to test their compatibility with the harsh Martian environment.

When SHERLOC is present, the universal rule is that Watson should be present too. The perseverance rover has the Watson tool that can snap pictures of the other components at work and detect the amount of dust in the inlet of MOXIE.

The CachCam will snap the pictures of the collection and caching of Martian samples.

We have some other cameras in the descent stage, the front and rear of the rover. Some of them just assist the it in a convenient path. The camera above the it can observe the parachute’s deployment during the “seven minutes of terror.” There is also a camera to witness the ground view. There are a total of four cameras dedicated to observing the entry and landing alone. The rest 19 cameras concentrate on Martian surface operations.

Having learned a lesson from the worn and torn wheels of the Curiosity rover, the scientists have designed improved and more durable wheels for Perseverance. 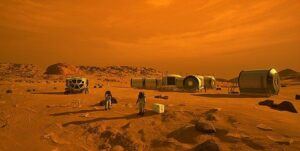 NASA’s impression of humans in Mars

The two Mars exploration rovers, Curiosity and Perseverance, are very similar. The difference lies in fixing the landing terrain and the  rotorcraft concept.

To summarize this, the Perseverance rover aims to uncover Martian past and pave the way for a Martian future involving Humanity. Let’s keep up our spirit and observe the Mars 2020 mission with curiosity. After all, it is going to persevere in exposing something genuinely groundbreaking. Hopefully, that will bestow upon us an insight into Humanity’s future.